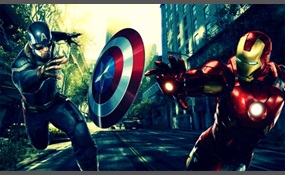 Who would win in a fight, Iron Man or Captain America?

Not the hulkbuster or thorbuster

Iron Man is a 2008 American superhero film featuring the Marvel Comics character Iron Man, produced by Marvel Studios and distributed by Paramount Pictures. It is the first installment in the Marvel Cinematic Universe. The film was directed by Jon F... avreau, with a screenplay by Mark Fergus and Hawk Ostby, Art Marcum and Matt Holloway. It stars Robert Downey, Jr., Terrence Howard, Jeff Bridges, Shaun Toub and Gwyneth Paltrow. In Iron Man, Tony Stark, an industrialist and master engineer, builds a powered exoskeleton and becomes the technologically advanced superhero Iron Man.The film had been in development since 1990 at Universal Pictures, 20th Century Fox, or New Line Cinema at various times, before Marvel Studios reacquired the rights in 2006. Marvel put the project in production as its first self-financed film, with Paramount Pictures as its distributor. Favreau signed on as director, aiming for a naturalistic feel, and he chose to shoot the film primarily in California, rejecting the East Coast setting of the comics to differentiate the film from numerous superhero films set in New York City-esque environments   more
13 votes
4 comments
Iron Man - Voter Comments

VinceValentine says2015-05-19T23:06:46.7874046-05:00
Report Post
Captain America is way cooler and he has better fighting skills without his shield. And iron man is nothin but a big stupid, rich nerd!!!! *pushes iron man over while he's carrying his study books and loses his glasses*
Vote & Comment
No comments yet.
Leave a comment...
(Maximum 900 words)
Privacy Policy | Terms of Use
Sitemap | View Desktop Version
©2020 Debate.org. All rights reserved.