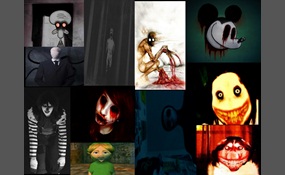 Who would win in a staring contest Tourney?

The Slender Man is a fictional character that originated as an Internet meme created by Something Awful forums user Eric Knudsen in 2009. It is depicted as resembling a thin, unnaturally tall man with a blank and usually featureless face, wearing a ... black suit. Stories of the Slender Man commonly feature him stalking, abducting, or traumatizing people, particularly children. The Slender Man is not confined to a single narrative, but appears in many disparate works of fiction, mostly composed online   more
4 votes
2 comments
Slender Man - Voter Comments