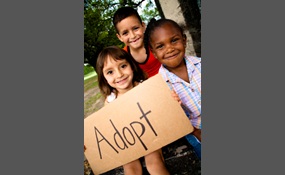 Who would you adopt?

Would you consider sex when you adopt someone?

Someone who had a bad start

A girl is a female human from birth through childhood and adolescence to attainment of adulthood when she becomes a woman. The term may also be used to mean a young woman. The word is also often used as a synonym for daughter.
3 votes
0 comments
Girl - Voter Comments
No Comments
Vote & Comment
4

A male organism is the physiological sex which produces sperm. Each spermatozoon can fuse with a larger female gamete, or ovum, in the process of fertilization. A male cannot reproduce sexually without access to at least one ovum from a female, but ... some organisms can reproduce both sexually and asexually. Most male mammals, including male humans, have a Y chromosome, which codes for the production of larger amounts of testosterone to develop male reproductive organs.Not all species share a common sex-determination system. In most animals, including humans, sex is determined genetically, but in some species it can be determined due to social, environmental or other factors. For example,Cymothoa exigua changes sex depending on the number of females present in the vicinity   more
2 votes
1 comment
Boy - Voter Comments

FreedomBeforeEquality says2015-05-18T10:23:19.1612644-05:00
Report Post
I think the older I am the easier it'd be. You could adopt a child thats already 10 or so ... And you yourself be in a much more advantageous financial position. It's a good combination for both. Now after I turn 50 ... Idk ... Thats probably the cutoff. I still gotta have the energy to be a dad. I don't know how guys that have newborns that old do it. Craziness.

FreedomBeforeEquality says2015-05-18T12:24:24.5488092-05:00
Report Post
Adopt at 13? Or adopt a 13yr old? That seems fine ... I mean you'd basically be there for emotional support and financial support through school for them at that point. They're fairly independent by then. But I don't know that you want such a large gap that you cant relate to them or anything. Idk. It'd be complicated.