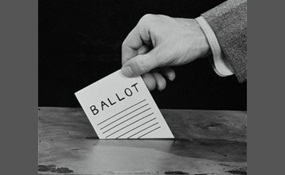 Who would you vote for?

The year is 2055, China has called in its loans (because it decided it hates you and wants to ruin your economy). Several extreme groups uses the resulting chaos to gain popularity in the election.

Want to make America strong again by not repaying loans and building up the army so they can invade Mexico and Canada and steal their stuff. They will then use the money to provide free healthcare and education for all Americans! And want all non-... Americans will be deported to Canada to work in sweat shop   more
7 votes
3 comments
The Nationalist Party - Voter Comments

Want to close all the borders and get rid of the currency.
5 votes
3 comments
The American Communist Party - Voter Comments

A small, unpopular group which has no chance of winning, so to pick this is to basically just throw away your vote.
3 votes
2 comments
Some other group - Voter Comments

The current government. They honestly don't really know what they're doing, but they're not going to enslave anyone or anything.
1 vote
1 comment
The American Honesty Party - Voter Comments

Promise to stop making loan repayments, which have destroyed the economy. Prospect of strong leadership appeals to people because many feel the government is too weak.
0 votes
0 comments
The American Far Right Totalitarian Party - Voter Comments
No Comments
Vote & Comment
Leave a comment...
(Maximum 900 words)