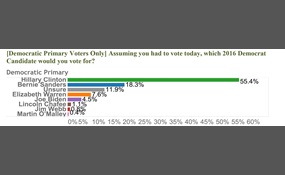 Who would you vote for (For Democrats)

Bernard "Bernie" Sanders is an American politician and the junior United States Senator from Vermont. Before serving in the Senate, he represented Vermont's at-large congressional district in the United States House of Representatives and served as ... mayor of Burlington, the largest city in Vermont. Sanders is a self-described democratic socialist, and has praised Scandinavian-style social democracy.Sanders runs for office as an independent but caucuses with the Democratic Party and is counted as a Democrat for purposes of committee assignments. He was the only independent member of the House during most of his service and is the longest-serving independent in U.S. Congressional history.In an interview with The Nation on March 6, 2014, Sanders stated that he is "prepared to run for President of the United States" in 2016   more
15 votes
3 comments
Bernie Sanders - Voter Comments

James Henry "Jim" Webb, Jr. Is an American statesman and noted author. He has served as a United States Senator from Virginia, Secretary of the Navy, Assistant Secretary of Defense, Congressional Counsel, and Marine Corps Officer. In the private sec... tor he has been an Emmy-award winning journalist, a film-maker, and the author of ten books. In addition, he taught literature at the United States Naval Academy and was a Fellow at the Harvard Institute of Politics. As a member of the Democratic Party, Webb announced on November 19, 2014, that he is forming an exploratory committee to evaluate a run for President of the United States in 2016.Webb graduated from the United States Naval Academy in 1968, receiving a special commendation for his leadership contributions. He was first in his class of 243 at the Marine Corps Officer's Basic School, served as a rifle platoon and infantry company commander in Vietnam and was awarded the Navy Cross, the Silver Star Medal, two Bronze Star Medals and two Purple Heart Medals. He graduated from the Georgetown University Law Center in 1975, having received the Horan Award for excellence in legal writing   more
1 vote
0 comments
Jim Webb - Voter Comments
No Comments
Vote & Comment
3
VOTING CLOSED

Lincoln Davenport Chafee is an American politician who has been the 74th Governor of Rhode Island since January 2011. Prior to his election as governor, Chafee served in the United States Senate as a Republican from 1999 until 2007. That same year, ... he left the Republican Party and became an independent. He is the first independent to serve as Governor of Rhode Island since John Collins, who served 1786–1790. On May 29, 2013, he announced he was switching his registration to the Democratic Party. On September 4, 2013, facing low approval ratings, Chafee announced that he would not seek re-election to a second term as Governor.A Rhode Island native educated at Phillips Academy and Brown University, Chafee worked as a professional farrier for seven years before entering state politics in 1985. He was a delegate to the Rhode Island State Constitutional Convention, a member of the Warwick, Rhode Island city council, and later the mayor of Warwick. Chafee was appointed to the United States Senate in 1999 upon the death of his father, Senator John Chafee, and was elected in the 2000 Senate election for a full six-year term   more
0 votes
0 comments
Lincoln Chafee - Voter Comments
No Comments
Vote & Comment
4
VOTING CLOSED

Lawrence "Larry" Lessig is an American academic and political activist. He is a proponent of reduced legal restrictions on copyright, trademark, and radio frequency spectrum, particularly in technology applications, and he has called for state-based...  activism to promote substantive reform of government with a Second Constitutional Convention. In May 2014, he launched a crowd-funded political action committee which he termed Mayday PAC with the purpose of electing candidates to Congress who would pass campaign finance reform.Lessig is director of the Edmond J. Safra Center for Ethics at Harvard University and a professor of law at Harvard Law School. Previously, he was a professor of law at Stanford Law School and founder of the Center for Internet and Society. Lessig is a founding board member of Creative Commons and the founder of Rootstrikers, and is on the board of MapLight. He is on the advisory boards of the Democracy Café, Sunlight Foundation and Americans Elect. He is a former board member of the Free Software Foundation, Software Freedom Law Center and the Electronic Frontier Foundation   more
0 votes
0 comments
Lawrence Lessig - Voter Comments
No Comments
Vote & Comment
5
VOTING CLOSED

Martin Joseph O'Malley is an American politician and the 61st and current Governor of Maryland. First elected in 2006, he defeated incumbent Governor Robert Ehrlich, and again in a 2010 rematch. Prior to being elected as Governor, he served as the M... ayor of Baltimore from 1999 to 2007, having previously served as a Baltimore City Councilor from 1991 to 1999. A member of the Democratic Party, he served as the Chair of the Democratic Governors Association from 2011 to 2013.As Governor, in 2011 he signed a law that would make certain undocumented immigrants eligible for in-state college tuition on condition; and in 2012, he signed a law to legalize same-sex marriage in Maryland. Each law was challenged to a voter referendum in the 2012 general election and upheld by a majority of the voting public   more
0 votes
0 comments
Martin O'Malley - Voter Comments
No Comments
Vote & Comment
6
VOTING CLOSED

Hillary Diane Rodham Clinton is a former United States Secretary of State, U.S. Senator, and First Lady of the United States. From 2009 to 2013, she was the 67th Secretary of State, serving under President Barack Obama. She previously represented Ne... w York in the U.S. Senate. Before that, as the wife of President Bill Clinton, she was First Lady from 1993 to 2001. In the 2008 election, Clinton was a leading candidate for the Democratic presidential nomination.A native of Illinois, Hillary Rodham was the first student commencement speaker at Wellesley College in 1969 and earned a J.D. From Yale Law School in 1973. After a brief stint as a Congressional legal counsel, she moved to Arkansas and married Bill Clinton in 1975. Rodham cofounded Arkansas Advocates for Children and Families in 1977. In 1978, she became the first female chair of the Legal Services Corporation, and in 1979, the first female partner at Rose Law Firm. The National Law Journal twice listed her as one of the hundred most influential lawyers in America. As First Lady of Arkansas from 1979 to 1981 and 1983 to 1992 with her husband as Governor, she led a task force that reformed Arkansas's education system   more
0 votes
0 comments
Hillary Rodham Clinton - Voter Comments
No Comments
Vote & Comment
Leave a comment...
(Maximum 900 words)