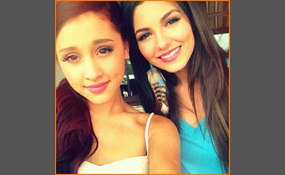 Victoria Dawn Justice is an American actress and singer-songwriter. She debuted as an actress at the age of 10 and has since appeared in several films and television series including the Nickelodeon series Zoey 101 and Victorious. She has made appea... rances in several theatrical releases, including Unknown as well as the 2006 thriller The Garden. She has appeared in several Nickelodeon series, including True Jackson, VP, The Troop, The Penguins of Madagascar and iCarly, as well as on the Nickelodeon game shows BrainSurge and Figure It Out as a contestant. In 2010, she starred in the Nickelodeon film The Boy Who Cried Werewolf.Aside from acting, Justice is involved in her musical career. She has performed several songs for the soundtrack to the Nickelodeon musical Spectacular!, in which she starred. She has recorded a number of songs for the Victorious series   more
2 votes
0 comments
Victoria Justice - Voter Comments
No Comments
Vote & Comment
2

Ariana Grande-Butera, known professionally as Ariana Grande, is an American singer and actress.She began her career in the Broadway musical 13, before landing the role of Cat Valentine on the Nickelodeon television series Victorious in 2009. After t... he show ended, Grande rose to prominence as a teen idol on her own spinoff, Sam & Cat.Grande's music career began with the soundtrack Music from Victorious. She signed a recording contract with Republic Records, which released her debut studio album, Yours Truly, which debuted at number one on the U.S. Billboard 200. The album's lead single, "The Way", became a top ten hit on the Billboard Hot 100 with critics comparing her wide vocal range to Mariah Carey.Grande's second studio album, My Everything, also reached number one in the United States, and contained the hit singles "Problem" and "Break Free". Some of her achievements include New Artist of the Year at the 2013 American Music Awards, Favorite Breakout Artist at the 40th People's Choice Awards, and Breakthrough Artist of the Year by the Music Business Association   more
0 votes
0 comments
Ariana Grande - Voter Comments
No Comments
Vote & Comment
Leave a comment...
(Maximum 900 words)