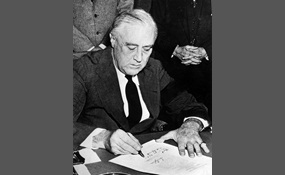 Who's power is it to 'Officially' Declare war against another nation?

The United States Congress is the bicameral legislature of the federal government of the United States consisting of two houses: the Senate and the House of Representatives. The Congress meets in the Capitol in Washington, D.C. Both representatives ... and senators are chosen through direct election, though vacancies in the Senate may be filled by a gubernatorial appointment. Members are affiliated to the Republican Party or to the Democratic Party, and only rarely to a third-party or as independents. Congress has 535 voting members: 435 Representatives and 100 Senators.The members of the House of Representatives serve two-year terms representing the people of a district. Congressional districts are apportioned to states by population using the United States Census results, provided that each state has at least one congressperson. Each state regardless of population has exactly two senators; at present there are 100 senators representing the 50 states. Each senator serves a six-year term, with terms staggered, so every two years approximately one-third of the Senate is up for election. Widespread public dissatisfaction with the institution has increased in recent years   more
10 votes
1 comment
United States Congress - Voter Comments

President of the United States