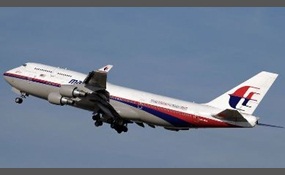 Who's responsible for shooting down MH17?

Russia or, also officially known as the Russian Federation, is a country situated in northern Eurasia. It is a federal semi-presidential republic. From northwest to southeast, Russia shares land borders with Norway, Finland, Estonia, Latvia, Lithuan... ia and Poland, Belarus, Ukraine, Georgia, Azerbaijan, Kazakhstan, China, Mongolia, and North Korea. It shares maritime borders with Japan by the Sea of Okhotsk, the U.S. state of Alaska across the Bering Strait and Canada's Arctic islands. At 17,075,400 square kilometres, Russia is the largest country in the world, covering more than one-eighth of the Earth's inhabited land area. Russia is also the world's ninth most populous nation with 143 million people as of 2012. Extending across the entirety of northern Asia and much of Eastern Europe, Russia spans nine time zones and incorporates a wide range of environments and landforms.The nation's history began with that of the East Slavs, who emerged as a recognizable group in Europe between the 3rd and 8th centuries AD. Founded and ruled by a Varangian warrior elite and their descendants, the medieval state of Rus arose in the 9th century   more
6 votes
3 comments
Russia - Voter Comments

SweetTea says2014-07-18T04:05:02.2789533-05:00
Report Post
If they supplied the BUK mobile missile system to these separatists, they bear a large portion of blame. Usually, in such cases, the weaponry is accompanied by military personnel (here it would be Russia) to aid in using the system.

IDK, but obviously those who want to frame Russia

https://en.wikipedia.org/wiki/False_flag False flag (or black flag) describes covert military or paramilitary operations designed to deceive in such a way that the operations appear as though they are being carried out by entities, groups or nations...  other than those who actually planned and executed them. Operations carried during peace-time by civilian organizations, as well as covert government agencies, may by extension be called false flag operations if they seek to hide the real organization behind an operation. Geraint Hughes uses the term to refer to those acts carried out by "military or security force personnel, which are then blamed on terrorists."[1] In its most modern usage, the term may also refer to those events which governments are cognizant of and able to stop but choose to allow to happen (or "stand down"), as a strategy to entangle or prepare the nation for war. Furthermore, the term "false flag terrorism" may even be used in those instances when violence is carried out by groups or organizations which, whether they know it or not, are being supported or controlled by the "victim" nation. DeHaven-Smith argues that the terminology has become looser in recent years due to the increasingly complex levels of "duplicity" and "international intrigue" between states.[2] Some argue that false flags are methods used by deep states as a form of deep politics.[3] The name "false flag" has its origins in naval warfare where the use of a flag other than the belligerent's true battle flag as a ruse de guerre, before engaging the enemy, has long been acceptable.[4] Such operations are also acceptable in certain circumstances in land warfare, to deceive enemies in similar ways providing that the deception is not perfidious and all such deceptions are discarded before opening fire upon the enemy   more
1 vote
1 comment
IDK, but obviously those who want to frame Russia - Voter Comments

Vere_Mendacium says2014-07-18T04:47:29.0396342-05:00
Report Post
Qui bono? Why would Russia / separatists do this? What would/do they get?! If separatists, why would they wait to use that equipment on a commercial plane, while steadily getting bombed/shot from other planes and helicopters. But, who would benefit from making the Russia/separatists appear to be the shooters to a docile/gullible world audience? ... hmmm...
Vote & Comment
6

Israel, officially the State of Israel, is a country in the Middle East, situated in the region of Western Asia, on the south-eastern shore of the Mediterranean Sea. It shares land borders with Lebanon in the north, Syria in the northeast, Jordan on...  the east, the Palestinian territories comprising the West Bank and Gaza Strip on the east and southwest respectively, Egypt and the Gulf of Aqaba in the Red Sea to the south, and it contains geographically diverse features within its relatively small area. In its Basic Laws, Israel defines itself as a Jewish and Democratic State; it is the world's only Jewish-majority state.On 29 November 1947, the United Nations General Assembly recommended the adoption and implementation of the partition plan of Mandatory Palestine. On 14 May 1948, David Ben-Gurion, the Executive Head of the World Zionist Organization and president of the Jewish Agency for Palestine, declared "the establishment of a Jewish state in Eretz Israel, to be known as the State of Israel," a state independent upon the termination of the British Mandate for Palestine, 15 May 1948. Neighboring Arab armies invaded Palestine on the next day and fought the Israeli forces   more
0 votes
0 comments
Israel - Voter Comments
No Comments
Vote & Comment
8

China, officially the People's Republic of China, is a sovereign state located in East Asia. It is the world's most populous country, with a population of over 1.35 billion. The PRC is a single-party state governed by the Communist Party, with its s... eat of government in the capital city of Beijing. It exercises jurisdiction over 22 provinces, five autonomous regions, four direct-controlled municipalities, and two mostly self-governing special administrative regions. The PRC also claims Taiwan – which is controlled by the Republic of China, a separate political entity – as its 23rd province, a claim which is controversial due to the complex political status of Taiwan.Covering approximately 9.6 million square kilometers, China is the world's second-largest country by land area, and either the third or fourth-largest by total area, depending on the method of measurement. China's landscape is vast and diverse, ranging from forest steppes and the Gobi and Taklamakan deserts in the arid north to subtropical forests in the wetter south. The Himalaya, Karakoram, Pamir and Tian Shan mountain ranges separate China from South and Central Asia   more
0 votes
0 comments
China - Voter Comments
No Comments
Vote & Comment
9

The West Ukrainian People's Republic was a short-lived republic that existed in late 1918 and early 1919 in eastern Galicia. It included the cities of Lviv, Przemyśl, Kolomyia and Stanislaviv and claimed parts of Bukovina and Carpathian Ruthenia. Po... litically, the Republic was dominated by the Ukrainian National Democratic Alliance, a party guided by varying degrees of Greek Catholic, liberal and socialist ideology. Among the other parties represented were the Ukrainian Radical Party and Ukrainian Democratic Party.The coat of arms of the West Ukrainian People's Republic showed a yellow lion against a blue background looking to the left. The colors of the flag were blue and yellow   more
0 votes
0 comments
Ukraine (loyalists) - Voter Comments
No Comments
Vote & Comment
Leave a comment...
(Maximum 900 words)