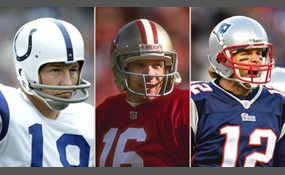 Whos The Best QB of All Time

Thomas Edward Patrick Brady, Jr., known universally as Tom Brady, is an American football quarterback for the New England Patriots of the National Football League. After playing college football for the University of Michigan, he was drafted by the ... Patriots in the sixth round of the 2000 NFL Draft.In Brady's fourteen seasons as a starter, the Patriots have earned five trips to the Super Bowl, winning three. He has also won two Super Bowl MVP awards, two league MVP awards, has been selected to nine Pro Bowls, and has led the Patriots to more division titles than any other quarterback in NFL history, with eleven. He is currently fifth on the all time list for career passing yards and fifth for career touchdown passes. His career postseason record is 18–8; his playoff win total is the highest in NFL history. He helped set the record for the longest consecutive win streak in NFL history with 21 straight wins over two seasons. He also set the record for most consecutive playoff wins with 10, and in 2007 led the Patriots to the first undefeated regular season since the institution of the 16-game schedule   more
7 votes
0 comments
Tom Brady - Voter Comments
No Comments
Vote & Comment
2

The "Other" is a key concept in Continental philosophy and in the social sciences; as such, the Other opposes the Same. The terms the Other and Otherness refer to who is and what is alien and divergent from the norm, from identity, and from the self... . The Constitutive Other usually denotes a different, incomprehensible Self that is external to the one's own Self; thus, the word Other usually is capitalized, because, conceptually, the Other is a mystification reduced to a fetish, by a hegemonic subject   more
6 votes
4 comments
Other - Voter Comments

Joseph Clifford "Joe" Montana, Jr., nicknamed Joe Cool and The Comeback Kid, is a retired professional American football player, a hall of fame quarterback with the San Francisco 49ers and Kansas City Chiefs. After winning a college national champio... nship at Notre Dame, Montana started his NFL career in 1979 with San Francisco, where he played for the next 14 seasons. Traded before the 1993 season, he spent his final two years in the league with the Kansas City Chiefs. While a member of the 49ers, Montana started and won four Super Bowls and three Super Bowl Most Valuable Player awards. Montana was elected to the Pro Football Hall of Fame, in 2000, his first year of eligibility. Montana is the only player to have been named Super Bowl MVP three times.In 1989, and again in 1990, the Associated Press named Montana the NFL Most Valuable Player, and Sports Illustrated magazine named Montana the 1990 "Sportsman of the Year". Four years earlier, in 1986, Montana won the AP NFL Comeback Player of the Year Award. Montana was elected to eight Pro Bowls, as well as being voted 1st team All-Pro by the AP in 1987, 1989, and 1990   more
3 votes
0 comments
Joe Montana - Voter Comments
No Comments
Vote & Comment
4

Peyton Williams Manning is an American football quarterback for the Denver Broncos of the National Football League. A five-time league MVP, he played for the Indianapolis Colts for 14 seasons between 1998-2011. He is a son of former NFL quarterback ... Archie Manning and an elder brother of New York Giants quarterback Eli Manning.Manning played college football for the University of Tennessee, leading the Volunteers to the 1997 SEC Championship in his senior season. However, No. 3 Tennessee lost to the No. 2 Nebraska Cornhuskers 42-17 in the Orange Bowl giving Nebraska and Tom Osborne their 3rd national championship in 4 years. He was chosen by the Indianapolis Colts with the first overall pick in the 1998 NFL Draft. Manning's playing career and statistics have ranked him among the greatest quarterbacks of all-time. From 1998 to 2010, he led the Colts to eight division championships, two AFC championships, and one Super Bowl championship   more
2 votes
0 comments
Peyton Manning - Voter Comments
No Comments
Vote & Comment
5

Jon Steven "Steve" Young is a former professional football player, a quarterback in the National Football League for fourteen seasons during the 1980s and 1990s. Young played college football for Brigham Young University, and played professionally f... or the Los Angeles Express of the USFL, and the NFL's Tampa Bay Buccaneers and San Francisco 49ers. Young was named the Most Valuable Player of the NFL in 1992 and 1994, and the MVP of Super Bowl XXIX. He is a member of the College Football Hall of Fame and the Pro Football Hall of Fame. At the time of his retirement, he had the highest passer rating among NFL quarterbacks who have thrown at least 1,500 passing attempts, and is currently ranked third. He is also still ranked highest amongst retired players. Young also won a record six NFL passer rating titles   more
0 votes
0 comments
Steve Young - Voter Comments
No Comments
Vote & Comment
No comments yet.
Leave a comment...
(Maximum 900 words)
Privacy Policy | Terms of Use
Sitemap | View Desktop Version
©2020 Debate.org. All rights reserved.