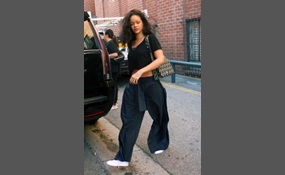 Who's the more dominate female?

In all categories: fashion, music/songs, performances, Fanbase. Instagram photos, etc. Explain why you chose who you chose. You can pink as many on this listen. "None" is not an option.

Beyoncé Giselle Knowles-Carter is an American singer and actress. Born and raised in Houston, Texas, she performed in various singing and dancing competitions as a child, and rose to fame in the late 1990s as lead singer of R&B girl-group Destiny's ... Child. Managed by her father Mathew Knowles, the group became one of the world's best-selling girl groups of all time. Their hiatus saw the release of Beyoncé's debut album, Dangerously in Love, which established her as a solo artist worldwide; it sold 11 million copies, earned five Grammy Awards and featured the Billboard Hot 100 number-one singles "Crazy in Love" and "Baby Boy".Following the disbandment of Destiny's Child in June 2005, she released her second solo album, B'Day, which contained hits "Déjà Vu", "Irreplaceable", and "Beautiful Liar". Beyoncé also ventured into acting, with a Golden Globe-nominated performance in Dreamgirls, and starring roles in The Pink Panther and Obsessed. Her marriage to rapper Jay-Z and portrayal of Etta James in Cadillac Records influenced her third album, I Am..   more
4 votes
1 comment
Beyoncé Knowles - Voter Comments

Taylor Alison Swift is an American singer-songwriter. Raised in Wyomissing, Pennsylvania, Swift moved to Nashville, Tennessee at the age of 14 to pursue a career in country music. She signed with the independent label Big Machine Records and became ... the youngest songwriter ever hired by the Sony/ATV Music publishing house. The release of Swift's self-titled debut album in 2006 established her as a country music star. Her third single, "Our Song," made her the youngest person to single-handedly write and perform a number one song on the Hot Country Songs chart. She received a Best New Artist nomination at the 2008 Grammy Awards.Swift's second album, Fearless, was released in 2008. Buoyed by the pop crossover success of the singles "Love Story" and "You Belong with Me", Fearless became the best-selling album of 2009 in the U.S. The album won four Grammy Awards, with Swift becoming the youngest ever Album of the Year winner. Swift's third album, 2010's Speak Now, sold over one million copies within the first week of its U.S release. The album's third single, "Mean", won two Grammy Awards   more
1 vote
0 comments
Taylor Swift - Voter Comments
No Comments
Vote & Comment
5

Shakira Isabel Mebarak Ripoll, is a Colombian singer-songwriter, dancer, record producer, choreographer, and model. Born and raised in Barranquilla, she began performing in school, demonstrating Latin, Arabic, and rock and roll influences and belly ... dancing abilities. Shakira released her first studio albums, Magia and Peligro, in the early 1990s, failing to attain commercial success; however, she rose to prominence in Latin America with her major-label debut, Pies Descalzos, and her fourth album, Dónde Están los Ladrones?.Shakira entered the English-language market with her fifth album, Laundry Service. Its lead single, "Whenever, Wherever", became the best-selling single of 2002. Her success was solidified with her sixth and seventh albums Fijación Oral, Vol. 1 and Oral Fixation, Vol. 2, the latter of which spawned the best-selling song of the 21st century, "Hips Don't Lie". Shakira's eighth and ninth albums, She Wolf and Sale el Sol, received critical praise but suffered from limited promotion due to her strained relationship with label Epic Records. Her official song for the 2010 FIFA World Cup, "Waka Waka", became the biggest-selling World Cup song of all time   more
1 vote
0 comments
Shakira - Voter Comments
No Comments
Vote & Comment
6

Stefani Joanne Angelina Germanotta, better known by her stage name Lady Gaga, is an American singer, songwriter, and actress. She initially performed in theater, appearing in high school plays and studied at CAP21 through New York University's Tisch...  School of the Arts before dropping out to pursue a musical career. After leaving a rock band, participating in the Lower East Side's avant garde performance art circuit, and being dropped from a contract with Def Jam Recordings, Gaga worked as a songwriter for Sony/ATV Music Publishing. There, Akon noticed her vocal abilities and helped her sign a joint deal with Interscope Records and his own KonLive Distribution.Gaga rose to prominence with her debut album The Fame, a critical and commercial success which produced global chart-topping singles such as "Just Dance" and "Poker Face". A follow-up EP, The Fame Monster, was met with similar reception and released the successful singles "Bad Romance", "Telephone", and "Alejandro". Her second full-length album Born This Way was released in 2011, topping the charts in more than 20 countries, including the United States, where it sold over one million copies in its first week   more
0 votes
0 comments
Lady Gaga - Voter Comments
No Comments
Vote & Comment
7

Jennifer Lopez was born in July 24, 1969 in the Bronx, NYC. Currently married to Hispanic singer Marc Anthony, she is the mother of two. Jennifer Lopez, also known as J Lo is a singer, actress, dancer, song writer, record producer, entrepreneur, fas... hion designer and television producer. She was named by Forbes The Riches Person of Latin America descent in Hollywood and the Most Influential Hispanic Entertainer in America by People en Espaol 100 most influential Hispanics list. After finishing school she realized she wanted to be in the show business and her career started dancing in different rap videos and doing some appearances in different TV shows. She became famous when she starred in Selena in 1997 and got a Golden Globe Award nomination for it   more
0 votes
0 comments
Jennifer Lopez - Voter Comments
No Comments
Vote & Comment
8

Robyn Rihanna Fenty, better known by her stage name Rihanna, is a Barbadian singer, actress, and fashion designer. Born in Saint Michael, Barbados, her career began upon meeting record producer Evan Rogers in late 2003 through mutual friends; she re... corded demo tapes with his guidance. Her tape was sent to several record labels, and she subsequently signed a contract with Def Jam Recordings after auditioning for its then-president, hip-hop producer and rapper Jay-Z. Both her debut album, Music of the Sun and its follow-up A Girl Like Me peaked in the top ten on the US Billboard 200; the former featured the commercially successful song "Pon de Replay" while the latter produced her first Billboard Hot 100 number-one single, "SOS".She rose to widespread prominence and became a household name with the release of her third studio album, Good Girl Gone Bad, and its chart-topping lead single "Umbrella." The album and its 2008 Reloaded re-release were nominated for nine Grammy Awards, winning Best Rap/Sung Collaboration for "Umbrella"   more
0 votes
0 comments
Rihanna - Voter Comments
No Comments
Vote & Comment
9

Ariana Grande-Butera, known professionally as Ariana Grande, is an American singer and actress.She began her career in the Broadway musical 13, before landing the role of Cat Valentine on the Nickelodeon television series Victorious in 2009. After t... he show ended, Grande rose to prominence as a teen idol on her own spinoff, Sam & Cat.Grande's music career began with the soundtrack Music from Victorious. She signed a recording contract with Republic Records, which released her debut studio album, Yours Truly, which debuted at number one on the U.S. Billboard 200. The album's lead single, "The Way", became a top ten hit on the Billboard Hot 100 with critics comparing her wide vocal range to Mariah Carey.Grande's second studio album, My Everything, also reached number one in the United States, and contained the hit singles "Problem" and "Break Free". Some of her achievements include New Artist of the Year at the 2013 American Music Awards, Favorite Breakout Artist at the 40th People's Choice Awards, and Breakthrough Artist of the Year by the Music Business Association   more
0 votes
0 comments
Ariana Grande - Voter Comments
No Comments
Vote & Comment
10

Mariah Carey is an American singer, songwriter, record producer and actress. Born and raised on Long Island, New York, Carey came to prominence after releasing her self-titled debut studio album Mariah Carey in 1990; it went multiplatinum and spawne... d four consecutive number one singles on the U.S. Billboard Hot 100 chart. Under the guidance of Columbia Records executive and later husband Tommy Mottola, she continued booking success with followup albums Emotions, Music Box, and Merry Christmas, Carey was established as Columbia's highest-selling act. Daydream made music history when its second single "One Sweet Day", a duet with Boyz II Men, spent a record sixteen weeks on top of the Billboard Hot 100, and remains the longest-running number-one song in U.S. chart history. During the recording of the album, Carey began to deviate from her R&B and pop beginnings and slowly traversed into hip hop. This musical change became evident with the release of Butterfly, at which time Carey had separated from Mottola.Carey left Columbia in 2000, and signed a $100 million recording contract with Virgin Records America   more
0 votes
0 comments
Mariah Carey - Voter Comments
No Comments
Vote & Comment
11