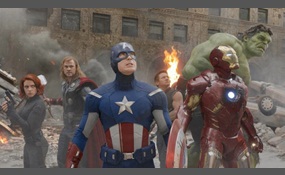 Whose your favorite avenger

Iron Man is a 2008 American superhero film featuring the Marvel Comics character Iron Man, produced by Marvel Studios and distributed by Paramount Pictures. It is the first installment in the Marvel Cinematic Universe. The film was directed by Jon F... avreau, with a screenplay by Mark Fergus and Hawk Ostby, Art Marcum and Matt Holloway. It stars Robert Downey, Jr., Terrence Howard, Jeff Bridges, Shaun Toub and Gwyneth Paltrow. In Iron Man, Tony Stark, an industrialist and master engineer, builds a powered exoskeleton and becomes the technologically advanced superhero Iron Man.The film had been in development since 1990 at Universal Pictures, 20th Century Fox, or New Line Cinema at various times, before Marvel Studios reacquired the rights in 2006. Marvel put the project in production as its first self-financed film, with Paramount Pictures as its distributor. Favreau signed on as director, aiming for a naturalistic feel, and he chose to shoot the film primarily in California, rejecting the East Coast setting of the comics to differentiate the film from numerous superhero films set in New York City-esque environments   more
9 votes
2 comments
Iron Man - Voter Comments

Captain America is a 1990 American-Yugoslavian superhero film directed by Albert Pyun. The film is based on the Marvel Comics superhero of the same name. While the film takes several liberties with the comic's storyline, it features Steve Rogers bec... oming Captain America during World War II to battle the Red Skull, being frozen in ice, and subsequently being revived to save the President of the United States from a crime family that dislikes his environmentalist policies   more
8 votes
3 comments
Captain America - Voter Comments

Hulk is a 2003 American superhero film based on the fictional Marvel Comics character of the same name. Ang Lee directed the film, which stars Eric Bana as Dr. Bruce Banner, as well as Jennifer Connelly, Sam Elliott, Josh Lucas, and Nick Nolte. The ... film explores the origins of Bruce Banner, who after a lab accident involving gamma radiation finds himself able to turn into a green-skinned monster when angry, while he is pursued by the United States military.Development for the film started as far back as 1990. The film was at one point to be directed by Joe Johnston and then Jonathan Hensleigh. More scripts had been written by Hensleigh, John Turman, Michael France, Zak Penn, J. J. Abrams, Scott Alexander and Larry Karaszewski, Michael Tolkin, and David Hayter before Ang Lee and James Schamus' involvement. Hulk was shot mostly in California, primarily in the San Francisco Bay Area.Hulk grossed over $245 million worldwide, higher than its $137 million budget, and received mixed reactions from critics   more
5 votes
4 comments
Hulk - Voter Comments

Thor is a 2011 American superhero film based on the Marvel Comics character of the same name, produced by Marvel Studios and distributed by Paramount Pictures. It is the fourth installment in the Marvel Cinematic Universe. The film was directed by K... enneth Branagh, written by Ashley Edward Miller, Zack Stentz and Don Payne, and stars Chris Hemsworth, Natalie Portman, Tom Hiddleston, Stellan Skarsgård, Colm Feore, Ray Stevenson, Idris Elba, Kat Dennings, Rene Russo and Anthony Hopkins. The film tells the story of Thor, the crown prince of Asgard, who is exiled from his homeland to Earth. While there, he forms a relationship with Jane Foster, a scientist. However, Thor must stop his adopted brother Loki, who intends to become the new king of Asgard.Sam Raimi first developed the concept of a film adaptation of Thor in 1991, but soon abandoned the project, leaving it in "development hell" for several years. During this time, the rights were picked up by various film studios until Marvel Studios signed Mark Protosevich to develop the project in 2006, and planned to finance it and release it through Paramount Pictures   more
2 votes
0 comments
Thor - Voter Comments
No Comments
Vote & Comment
6

Hawkeye is a fictional character. She is a member of the Young Avengers, a team of superheroes in the Marvel Comics' shared universe, the Marvel Universe. She is the third character and first female to take the Hawkeye name after Clint Barton of the...  Avengers and Wyatt McDonald of the Squadron Supreme. Her costume appearance is patterned on the first Hawkeye and Mockingbird   more
0 votes
0 comments
Hawkeye - Voter Comments
No Comments
Vote & Comment
Leave a comment...
(Maximum 900 words)