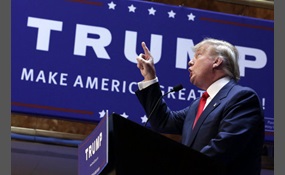 Why are you voting for Trump?

Comments would be great

He wants to build a "great great wall"

Forthelulz says2015-09-09T19:35:04.0692076Z
Report Post
If the illegals are stopped, then the young urban black men will be able to get those jobs. (That isn't racism; Obama's bleeding heart immigration policies really hurt them because the immigrants are willing to work for less. Also, they did some numbers, and his support is dropping among that demographic.)
Vote & Comment
2

I just want to vote to keep up with the poll.

3 votes
2 comments
I just want to vote to keep up with the poll. - Voter Comments

Mister_Man says2015-09-09T17:34:22.5660161Z
Report Post
He's not a politically correct cuck giving into the lowest common denominator. He speaks his mind and actually has some good plans ready for implementation. Border wall, new tax brackets, getting rid of illegal immigrants using up taxpayers' money in prisons, etc.

He has a foolproof plan for the middle east

It's so foolproof that hes doesn't need military advisers.
1 vote
0 comments
He has a foolproof plan for the middle east - Voter Comments
No Comments
Vote & Comment
6

Hes all about family values

"I don’t think Ivanka would do that [pose for Playboy], although she does have a very nice figure. I’ve said if Ivanka weren’t my daughter, perhaps I’d be dating her." - Donald Trump
0 votes
0 comments
Hes all about family values - Voter Comments
No Comments
Vote & Comment
9

Trump is just another step ford

First there was Reagan, then there was Bush and now here is Trump.
0 votes
0 comments
Trump is just another step ford - Voter Comments
No Comments
Vote & Comment
Leave a comment...
(Maximum 900 words)

TBR says2015-09-09T16:28:57.6900568Z
Report Post
The real estate tycoon has been a party (as defendant or plaintiff) in about 100 federal lawsuits, according to a review of a legal database. Moreover, five of Trump’s major companies have been embroiled in over 200 civil suits in federal courts, according to court records.

Forthelulz says2015-09-09T19:34:15.6923672Z
Report Post
He's transparent and up front about what he wants to happen, unlike the "current reality" literally every other candidate. Also, our other options are Bernie "f*ck yo risk-takers" Sanders and the wife of William "I did not have sex with that woman" Clinton. It's a question of who will do less damage, and Trump, when all is said and done, is the best.