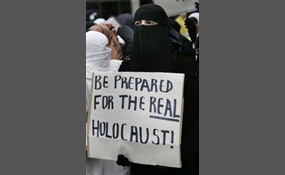 Why do some American "liberals" tiptoe around offending Islam when it clearly rejects free principles.

It is quite evident, through polling and research, that the majority of muslims hold ancient conservative views. People who are about to make the "few bad apples" argument should just leave this poll now.

They fear being called a xenophobe, islamophobe, or racist. Basically cowards (fear)

They believe if they do nothing, Islam will peacefully assimilate without conquest (delusion)

0 votes
0 comments
They believe if they do nothing, Islam will peacefully assimilate without conquest (delusion) - Voter Comments
No Comments
Vote & Comment
Leave a comment...
(Maximum 900 words)

ChosenWolff says2014-07-16T00:17:45.7814331-05:00
Report Post
Any principles rejected in Islam are also rejected in strict christian doctrine. They call it sharia. We don't have a name for our "divine law". What principles are you talking bout btw

Renegader says2014-07-16T19:47:24.1675331-05:00
Report Post
How is it skewed? There is no denying that a large portion of muslims find it blasphemous to depict anything related to Muhammad in the media. A huge amount also oppose gay rights. By free principles I merely meant freedom of speech and expression. Knew there would be at least one troll making the bad apples argument and quoting me as saying "terrorist."

SweetTea says2014-07-17T07:02:52.8022664-05:00
Report Post
IN America, we have freedom of religion. Did you forget that? Islam is a religion. Nobody is asking you to practice it, but in this country people have the right to practice Islam if they choose. So, Liberals aren't trying to tiptoe around anything. It's called the U.s. Constitution -- read it! Http://www.Usconstitution.Net/xconst_Am1.Html

Preston says2014-07-17T07:05:04.0142998-05:00
Report Post
You moron, you realize even in places like Iran, a theocracy, they aren't strict about religion they don't hold "ANCIENT CONSERVATIVE VIEWS" many of them hold modernized views and liberal views, so yea its SKEWED.

Preston says2014-07-17T11:09:47.2522639-05:00
Report Post
Maybe you are just confused, how about you goto Iran, like I did, and go teach in a school. When you see that its not centered around "Ancient" views, people aren't stoning each other in the street, when the call to prayer happens people don't drop to the ground, they ignore it and keep working, take a picture of your face and send it to me. Once I get past the fact your 6 maybe 7, I will laugh.

Renegader says2014-07-19T14:19:13.4299615-05:00
Report Post
Preston you are clearly ignorant. I simply meant that Islam should be able to be criticized without mass rioting overseas. See the Danish cartoon incident since you refuse to accept reality. As a wise man Christopher Hitchens once said, "Islamophobia - a word created by fascists, and used by cowards, to manipulate morons."
Privacy Policy | Terms of Use
Sitemap | View Desktop Version
©2020 Debate.org. All rights reserved.