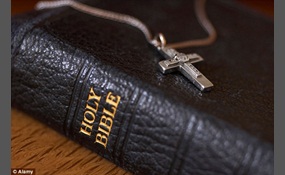 Why is Christianity the largest religion in the world?

Approximately 30% of people worldwide believe in the Christian God.

The Christian God has revealed that He is real.

8 votes
2 comments
The Christian God has revealed that He is real. - Voter Comments

People are foolish and will believe anything.

6 votes
3 comments
People are foolish and will believe anything. - Voter Comments

Other -put in comments-

The_Immortal_Emris says2014-08-15T13:14:36.6134421-05:00
Report Post
They were the most effective in murdering the other religious groups then indoctrinating the people through violent coercion.

Chimera says2014-08-15T15:40:19.4064420-05:00
Report Post
The Roman Empire adopted it as the official religion during Constantine's reign. This started a long process to the de-paganization of Europe. Eventually making Christianity the dominant religion there. After this, the European powers began to colonize the Americas, spreading Christianity to this region of the globe. So, in simple turns, historical reasons and luck caused Christianity to become the largest religion.

Warik says2014-08-15T15:52:03.6039840-05:00
Report Post
Roman empire adopted christianity, Christianity spread throughout europe. Then European Nations colonized most of the world and spread their religion forcefully to the inhabitants. While many countries today remain majority non-christian, christianity can be found in almost every nation thanks to european colonization. Also christian missionaries and churches had the power to extend their influence over most of the world

leonitus2464 says2014-08-16T22:15:37.5744903-05:00
Report Post
Christianity was spread by force starting with the de paganization of Europe under Constantine. Christianity was also popularized by the Catholic Church in the medieval era.
Vote & Comment
4

Many people recognize Christianity as the one true religion.

Cassie412 says2014-08-15T14:03:12.0079788-05:00
Report Post
Are those people Christian? Jesus commanded us to love our enemies and turn the other cheek. Those people were misguided extremists who did not display the qualities Christ tells us to embody.

medv4380 says2014-08-15T14:21:01.0618845-05:00
Report Post
Same reason Islam is number 2, and counting bias. Forced conversion in early Christianity. Then Catholics and Baptists are arguably different religions just as Sunni, and Shea are different religions. But they're counted as Christian, and Muslim respectively. If I subtracted all the Mormons Baptists claim aren't Christian and all the Catholics the Protestants claim aren't Christian then Christians wouldn't be largest any more.

BblackkBbirdd says2014-08-15T15:11:45.9539459-05:00
Report Post
Quite simply,it was the religion of empires. Rome spread it across its empire, after it fell the countries of its former empire France, Spain, England... In turn spread Christianity to countries in their empires establishing Christianity as a world religion.

Cassie412 says2014-08-15T16:16:25.1492901-05:00
Report Post
The Old Testament covenant laws were replaced by the New Covenant. King James Version Romans 7: 4-6 (especially verse 6) "So, my brothers and sisters, you also died to the law through the body of Christ, that you might belong to another, to him who was raised from the dead, in order that we might bear fruit for God. For when we were in the realm of the flesh, the sinful passions aroused by the law were at work in us, so that we bore fruit for death. But now, by dying to what once bound us, we have been released from the law so that we serve in the new way of the Spirit, and not in the old way of the written code." Rules to kill witches and heretics stopped applying when Jesus died on the Cross. Murders in the name of Christ are neither right nor Christian. To 1814Username: there's no way to know if someone is truly a Christian if you ask them, but at least according to pretty much every modern census, Christianity is the largest religion.

Spec10 says2014-08-16T00:30:13.7997563-05:00
Report Post
Its because of Constantine. He won a battle with his wife's cross on his neck (he had been losing against his enemies and was trying everything) during a battle he renounced his pagan gods mid fight and said something like "If you (the christian god) give me victory here, I will remain loyal forever" and he ended up winning. He then moved to control all of the Roman Empire, and so, Christianity became the new "in" religion because the emperor followed it. And Rome is the most influential state of pretty much all time so yeah.

Naqshbandi-Mujahid says2014-08-16T15:25:55.9003059-05:00
Report Post
Because the founders of this religion wanted money power an influance in the world and twisted the word of Jesus(PBUH) and made it into there own. Just go to the Vatican you can see it all there. They wanted to be something and made "exceptions" and reforms over time so that they could get as many followers as possible.
Privacy Policy | Terms of Use
Sitemap | View Desktop Version
©2020 Debate.org. All rights reserved.