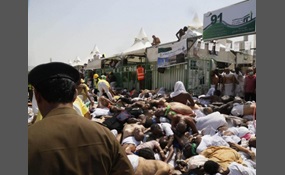 Why Saudi Arabia's government kills so many Muslims?

Saudi kings want a war in the middle east! It is a trap for Shia Muslims!

2 votes
1 comment
Saudi kings want a war in the middle east! It is a trap for Shia Muslims! - Voter Comments

shalal12 says2015-09-30T12:16:18.9388023Z
Report Post
They have killed some thing around 4500 people in Mina and they claim that they died because of an accident! Still no apologies they make fun of the dead people and make animations of the dead people without showing the real videos! *Reducing the price of oil from 100 to 40 dollars *Attacking Yemeni Shia Muslims *raping two Shia boys *killing 4500 in Mina *persuading their people that Shia Muslims are kafir and they should die *Buying many modern weapons from Israel and USA and....
Vote & Comment
2

They dont mean to kill. These are just accidents.

1 vote
1 comment
They dont mean to kill. These are just accidents. - Voter Comments

Saudi Arabia is a tyranny

Vox_Veritas says2015-09-29T16:53:19.1033620Z
Report Post
I'm just saying: both groups are part of the same freaking religion. Why are Sunnis and Shi'ites unable to co-exist? Christians largely put aside Catholic-Protestant conflict a long time ago.

shalal12 says2015-09-29T18:22:23.4355056Z
Report Post
@Vox_Veritas We have no problem with Sunni brothers. Neither do they have with us. The problem is Wahhabi Muslims (many Sunni people dont regard them as Sunni alghough Wahhabi people claim that they are Sunni). All the terrorists are basically Wahhabi! Have you ever asked yourself why USA supports Wahhabiat?

shalal12 says2015-09-29T18:30:38.9053296Z
Report Post
@Vox_Veritas It has been only 2 centuries that Wahhabiat came to exist. British government made this shameful sec and entered it itno Islam world. The Wahhabi people kill Muslims. Just look what Wahhabi terrorists have don in Syria and Iraq! Saudi Arabia kings are also a Wahhabi and they pose threat to others

shalal12 says2015-09-29T18:35:25.0728952Z
Report Post
@komododragon8 Do research how Wahhabiat came to exist! Read the memories of Mr. Hempher, the British spy. Saudi Arabia is spending lots of money to spread this dangerous sec in different countries even in Europe! Just look to Pakistan. Their new generation is becoming dangerous as they have been studied in Wahhabi schools! Why USA backs them?

triangle.128k says2015-09-30T01:04:52.4881362Z
Report Post
I'm not sure exactly why US supports Saudi Arabia, but I think it's because we see them as a useful ally in the region. They're the strongest regional power after Turkey in the middle east. They also supply us with oil, almost every american you meet would hate Saudi Arabia if they knew everything that goes on in there.

mark.mark says2015-09-30T02:53:23.9679543Z
Report Post
@Vox when you say "Except in Ireland" are you talking about the troubles in Northern Ireland? The conflict there wasn't down to religion it was over the British still controlling part of Ireland. Yes the majority of people who fought for a united Ireland were Catholic and those apposed were Protestant but that's just due to the fact Catholicism is the main religion in Ireland and Protestantism in Britain. Some of the major people who fought for a united Ireland were Protestant.

shalal12 says2015-09-30T07:10:20.7390694Z
Report Post
@triangle 1.We are all proud of having a theocracy which is built on 11 Imams' orders. We are waiting for the 12th who will come with Christ, peace be upon them both. 2.Saddam and Benladan were also go0d allies for you in a period of time. Then when they turned back to you, you invaded Iraq and Afghanistan and you killed thousands of innocents. Your government supports some stupid and wild kings, these kings are Wahhabi with dangerous thoughts. They will not hesitate fighting with anyone if they feel danger. I hope you understand
Privacy Policy | Terms of Use
Sitemap | View Desktop Version
©2021 Debate.org. All rights reserved.