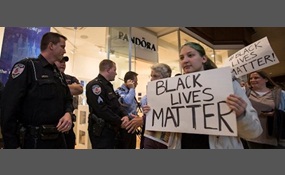 Why won't the black lives matter people admit they were wrong?

Jonathan Capehart wrote an article for the Washington post called "hands up was built on a lie". He admits that he was wrong about ferguson and that Darren Wilson is innocent. Still some people won't acknowledge facts and continue to demonize an innocent man.

They're to stupid to understand facts

They're in denial that they are wrong

The facts have been kept from them

They are to embarrassed to admit their mistake

They are in denial that Darren Wilson is innocent

0 votes
0 comments
They are in denial that Darren Wilson is innocent - Voter Comments
No Comments
Vote & Comment
Leave a comment...
(Maximum 900 words)

Dilara says2015-04-08T09:13:59.0302456-05:00
Report Post
And 7 black witnesses supported Wilson's claim that brown was charging him. The witnesses who claimed he had his hands up were deemed no credible by the DOJ because their stories weren't supported by physical evidence or their previous stories--they changed their stories.

TBR says2015-04-08T09:55:34.6439269-05:00
Report Post
Black life's mater was not wrong, and was not just about Wilson. Aside from that, did you read the report? Or at least get an actual honest understanding of it? Its terrible what is going on. The reaction was to a systemic problem that exists.

briantheliberal says2015-04-08T10:29:36.2987024-05:00
Report Post
So black lives don't matter Dilara? I have had enough of your biased bs on this site. I seriously think you need mental help. This isn't an insult, I am dead serious. This isn't normal and you show some symptoms of someone who is mentally disturbed, like most angry, delusional and incompetent trolls on the internet.

Dilara says2015-04-08T10:50:02.8253677-05:00
Report Post
Tbr. Read jon capeharts article. Than get back to me. Read my previous comments at least. Brown was shot in the top of the arm--but if he had his hands up in surrender position than the bottom of his arm would be facing Wilson and it would be impossible for Wilson to have shot him in the top of the arm. 7 black witnesses support Wilson's claims that brown was moving towards Wilson. 6 black witness's support the black lives matter peoples claim that brown was surrendering--but all those witnesses were deemed not credible by the DOJ as they changed their stories many times and none of their stories were supported by physical evidence.

TBR says2015-04-08T10:55:53.2973604-05:00
Report Post
"jon capeharts" I have. Also listened to an interview he did. Also, I have listened to a good discussion on the complete findings of the fed report. You are concentrating on the scuffle and shooting (issues absolutely) and ignoring the problem that was being discussed and highlighted (as shown in the complete FED report).

58539672 says2015-04-08T11:09:34.4720092-05:00
Report Post
I dont dispute the results of the Ferguson trial. Although it was tragic, all available evidence supports Wilson's innocents. But none the less, that doesn't excuse the fact that the Ferguson PD were at fault for racially discriminating against minority groups. The Justice department has investigated the FPD and found a substantial amount of evidence to support this. The anger behind the Black Lives Matter movement is based behind this poor treatment, with the shootings itself being the spark that lit the powder keg.

briantheliberal says2015-04-08T11:53:20.5392473-05:00
Report Post
Yes you are right about one thing, all lives do matter, but it's not about all lives because all lives aren't treated the same no matter how much you want to pretend they are. It's not white people being murdered in cold blood due to the systematic racism that justifies it. It's not white victims who's murderes face no justice for their crimes, no body questions their humanity or whether or not they deserved to live when it happens. I am not too much involved in the movement nor do I know about everything that goes on but I can still see the injustice, and people like you only further racial tension while hiding behind this fake mask of "equality". You don't even know what the movement is about which is why you keep showing your ignorance on the subject through these ridiculous and asinine polls and comments you make.

Renegader says2015-04-08T11:58:25.3115078-05:00
Report Post
I don't mind the movement as a whole but they need to stop with the "hands up, don't shoot" crap. It is now obvious based on evidence and witnesses that Darren Wilson was assaulted by Brown. Brown never even had his hands up. Maybe both sides could try to be a little more honest.

benhos says2015-04-08T15:24:42.4254818-05:00
Report Post
Because they weren't wrong. I am still standing strong on my stance that Michael Brown never had contact with Wilson. He robbed a convenience store, walked out, Wilson aimed, and Brown ran away as he was being shot.

Dilara says2015-04-08T15:50:28.3713515-05:00
Report Post
Brian Which black person was killed by a white cop and didn't get justice? And tbr I am talking about the shooting if michael brown the criminal only. I am aware if the racial profiling, racist jokes and other things the ferguson pd did. I am fine with people speaking out about that but the specific incident that out that town on the map was justified and nothing more the an innocent man saving his life from a dangerous and violent criminal.

Dilara says2015-04-08T15:54:27.4055546-05:00
Report Post
Benhos at least read the article. 1 Browns blood and skin from his palm were found on Wilson's uniform, car and gun. 2 Gun res was on Browns clothes. 3 Brown had a shot in the hand that could have only come from close range. These facts in the DOJ report that prove that brown assaulted Wilson. After assaulting Wilson brown took off than turned back and charged. 7 black witnesses support this and say brown moved toward Wilson. Brown was shot in the front including once in the arm--the top of the arm--but if he had his hands up he would have been shot in the bottom of the arm.

Stefy says2015-04-08T19:02:56.8047518-05:00
Report Post
Because its not Brown and Wilson. Its about systemic injustice. Because the semantics of the movement and the 1 particular michael brown case are not the point of the movement and the slogan still applies to too many situations. The movement will not stop until the injustice is stopped and people like you will not stop it.
Privacy Policy | Terms of Use
Sitemap | View Desktop Version
©2020 Debate.org. All rights reserved.