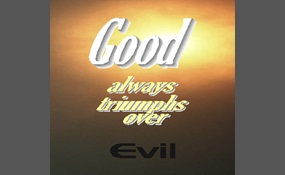 Will evil triumph over good

The GEICO 500 is a NASCAR Sprint Cup Series stock car race held at Talladega Superspeedway in Talladega, Alabama. The race is one of four Sprint Cup races currently run with restrictor plates, the others being the Aaron's 499, the Coke Zero 400, and...  the Daytona 500. Through 1996, this race was normally held in early August or late July. In 1997, it was moved to early October due to the uncomfortably hot summer temperatures, and sometimes unpredictable summertime thunderstorms in the Alabama area. In 2009, the race moved again, this time to November 1 as part of a realignment agreement with Atlanta and Fontana.In 1998, the name of the race was swapped with that of the Talladega spring race. The fall race became known as the Winston 500 for three years in order to promote the Winston No Bull 5 program.This race has been on average the most consistently competitive in NASCAR history. The race has broken 40 official lead changes in 1971, 1973, 1975-8, 1983-4, 1989, 2000, and every year since 2003; in 14 of these, the race exceeded 50 lead changes, most recently in 2013 with 52, and in 2010 the race reached 87 lead changes, one short of the motorsports record set in April. The 2012 race, run on October 7, featured 54 lead changes and a 25-car crash on the final lap. Dale Earnhardt Jr. Had a concussion after the rac   more
0 votes
0 comments
Good Sam Roadside Assistance 500 - Voter Comments
No Comments
Vote & Comment
Leave a comment...
(Maximum 900 words)