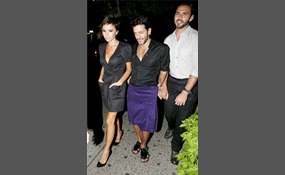 Not men who want to look like women, but rather men who just prefer skirts

Kilts are not skirts. You can look manly in a kilt; whereas you'd just look like a tranny in a skirt.

10 votes
1 comment
Kilts are not skirts. You can look manly in a kilt; whereas you'd just look like a tranny in a skirt. - Voter Comments

Patagoniakid says2015-11-03T14:18:20.3553162Z
Report Post
False! A "Kilt" IS a "Skirt" by definition (any dictionary). A kilt is a particular type of skirt (and there are thousands of types) that is usually tartan, hot, heavy and costly. Some skirts are much more suitable for guys than kilts like cargo mini skirts with lots of useful pockets, belt loops, heavy material, usually plain or camo and if short fantastic freedom of movement. Chicks all say it looks better than men's shorts... I'll go with their opinion...
Vote & Comment
3

Except For Scotland, No!

I think society should accept it, but I don't believe society ever will accept it.

1 vote
0 comments
I think society should accept it, but I don't believe society ever will accept it. - Voter Comments
No Comments
Vote & Comment
9

Austin Scarlett is an American fashion designer and artist best known for his appearances on the first season of Project Runway, the 2012 "Project Runway: All-Stars", and his own series, On the Road with Austin and Santino.
0 votes
0 comments
Austin Scarlett - Voter Comments
No Comments
Vote & Comment
11

This is already the case...In Scotland.

briantheliberal says2014-03-31T01:38:43.3131553-05:00
Report Post
This poll is ridiculous. Why are people using the word "tranny" to describe someone who wears something specific of the opposite gender? It's offensive and ignorant.

tyler3923 says2014-03-31T14:03:40.0065500-05:00
Report Post
@briantheliberal, pop quiz. You see a guy wearing a dress. Is he most likely a.) A guy who identifies himself as a male but likes publicly wearing female specific clothing. Or b.) A transsexual who is a biological male that identifies as a female. Just a tip, if you dont want people to think you are a transsexual, dress like a man. Insensitive? Maybe. True? Absolutely.

Patagoniakid says2015-11-03T14:46:20.8352325Z
Report Post
Men have worn skirts far far longer throughout time than women have and many were today's micro mini length so length isn't an issue. Top clothing designers say there are NO reasons for men not to wear skirts. Finally isn't is more logical for a male to wear a skirt than a female based on anatomy alone... No crotch binding inseams, cooler than shorts, and if short, freedom of movement is unlike anything most guys wear plus they look better than pants or shorts on guys according to the chicks I've met.
Privacy Policy | Terms of Use
Sitemap | View Desktop Version
©2021 Debate.org. All rights reserved.