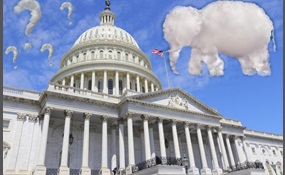 Will the GOP survive its internal split?

Business conservatives and the religious right make up the Republican Party but have decidedly different interests. The first is more concerned with fiscal policy while the latter could care less about government spending and such (just look at Mississippi). Recently, the internal divide has surfaced again in light of Indiana's new religious freedom law.

Yes, but not for a while

The party will overcome the split for the next few elections, if only to prevent a liberal takeover. However, the underlying problem will not resolve itself, and eventually it will be too large to suppress.
5 votes
1 comment
Yes, but not for a while - Voter Comments

Wylted says2015-04-01T10:01:29.7542716-05:00
Report Post
No underlying problem. The Republican Party has a big umbrella that many ideologies belong under. The Democratic Party is more united because they are a bunch of Xombies, but the Republican Party is okay with discord, because intelligent people don't always agree on things.
Vote & Comment
2

No, compromise is enough to maintain party unity

Politics is based on compromise. Party members will be able to put their differences aside for a long time and make sure they work on what they agree on to contend with the Democrats. Just look at the other side; Democrats have a wide array of views...  and have maintained a strong party over the years   more
1 vote
1 comment
No, compromise is enough to maintain party unity - Voter Comments

Marauder says2015-04-01T11:28:18.7862908-05:00
Report Post
This is closest to my view out of the 4 options. I believe there is a generational and ideological shift occurring that is ready to transform the party, just waiting on the right leader who could guide members of sides of the GOP through it like Rand Paul. The party is not going to split, but it is also not going to continue to be exactly the same as it is now.
Vote & Comment
3

Yes, the party will split in the near future

The conflict of interest is too large for the party to survive; the problems will reach a climax in the election or two, the Democrats will take a strong hold on the government, and the party will be forced to make extreme changes.
1 vote
0 comments
Yes, the party will split in the near future - Voter Comments
No Comments
Vote & Comment
4

No, but they will adapt

Either the business side or religious side will start to lose the battle, and the other will take a stronger hold, reinvigorating the population with its ideals. Perhaps the country will move closer to European-style socialism, choking out fiscally-... motivated members. On the other hand, the age of information and atheism may destroy the religious right (there are more secular youth than ever before)   more
0 votes
0 comments
No, but they will adapt - Voter Comments
No Comments
Vote & Comment
Leave a comment...
(Maximum 900 words)

TBR says2015-04-01T10:05:16.0335205-05:00
Report Post
It has always been an oddly cobbled coalition. The polar interests is the problem. Liberals (myself included) are fond of saying that the right votes counter to its own self intrests. Due to manipulation they garner the support of the bulk of their voters for representatives that care little about the actual policy's that effect them most. Tossing the religious right a bone or two on same-sex marriage, or new restrictions on abortion providers. That's all.

Mathgeekjoe says2015-04-01T10:13:08.4734635-05:00
Report Post
I kind of hate that there aren't many good republican congress members, or democrat congress members for that matter. You have too many politicians that think they only need to toss a bone or two to their constituents, and claim that well they aren't as bad as the other guy. I personally think a STV system might give both parties better congress members.