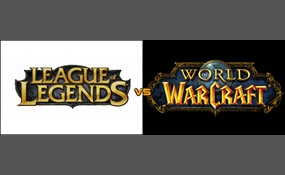 World of Warcraft (commonly known as WoW) is a pay-to-play massively multiplayer online role-playing game. It is Blizzard Entertainment's fourth game set in the fantasy Warcraft Universe, first introduced by Warcraft: Orcs & Humans in 1994. World of...  Warcraft takes place within the world of Azeroth, four years after the events at the conclusion of Blizzard's previous release, Warcraft III: The Frozen Throne. Blizzard Entertainment announced World of Warcraft on September 2, 2001. The game was released on November 23, 2004, celebrating the 10th anniversary of the Warcraft franchise.Although its initial release was hampered by server stability and performance issues, the game became a financial success and the world's largest MMORPG in terms of monthly subscribers. On July 24, 2007, Blizzard announced that the user base for World of Warcraft had reached a new milestone, with 9 million players worldwide. There are more than 2 million players in North America, 1.5 million players in Europe, and 3.5 million players in China as of January, 2007. The game has won numerous awards and recognitions, including GameSpot's Game of the Year Award for 2004.There is also a World of Warcraft Board Game published by Fantasy Flight Games and a World of Warcraft Trading Card Game published by Upper Deck Entertainment.The first official expansion pack of the game, The Burning Crusade, was released on January 16, 2007   more
7 votes
0 comments
World of Warcraft - Voter Comments
No Comments
Vote & Comment
2

League of Legends is a multiplayer online battle arena video game developed and published by Riot Games for Microsoft Windows and Mac OS X, inspired by the mod Defense of the Ancients for the video game Warcraft III: The Frozen Throne. It is a free-... to-play game, supported by micro-transactions. The game was first announced on October 7, 2008, and released on October 27, 2009. League of Legends was generally well received at release, and has grown in popularity in the years since. According to a 2012 Forbes article, League of Legends was the most played PC game in North America and Europe in terms of the number of hours played. As of January 2014, over 67 million people play League of Legends per month, 27 million per day, and over 7.5 million concurrently during peak hours   more
2 votes
0 comments
League of Legends - Voter Comments
No Comments
Vote & Comment
Leave a comment...
(Maximum 900 words)