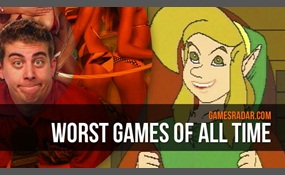 Worst games of all time

E.T. The Extra-Terrestrial is a 1982 adventure video game developed and published by Atari, Inc. For the Atari 2600 video game console. It is based on the film of the same name, and was designed by Howard Scott Warshaw. The objective of the game is ... to guide the eponymous character through various screens to collect three pieces of an interplanetary telephone that will allow him to contact his home planet.Warshaw intended the game to be an innovative adaptation of the film, and Atari thought it would achieve high sales figures based on its connection with the film, which was extremely popular throughout the world. Negotiations to secure the rights to make the game ended in late July 1982, giving Warshaw only five and a half weeks to develop the game in time for the 1982 Christmas season. The result is often cited as one of the worst video games released and was one of the biggest commercial failures in video gaming history. The game's commercial failure and resulting effects on Atari are frequently cited as a contributing factor to the video game industry crash of 1983.E.T. Is frequently cited as a contributing factor to Atari's massive financial losses during 1983 and 1984   more
8 votes
1 comment
E.T. The Extra-Terrestrial - Voter Comments

Donderpants says2015-06-26T05:07:37.4117263-05:00
Report Post
This and Pacman Atari are known as responsible for almost collapsing the video game industry. Suddenly global profits plummeted. While a few other factors are responsible, you have to admit- making 12,000,000 copies of a game when the game console it's dependent on has sold 10,000,000 units logically does not make much sense. Did they expect 2,000,000 more people to magically buy Atari 2600 consoles? They almost killed video games- all the people respected in the finance world said that video games were probably not going to stick around after that. And we can just thank Nintendo that it didn't.
Vote & Comment
2

Zelda: The Wand of Gamelon

Minecraft is a sandbox independent video game originally created by Swedish programmer Markus "Notch" Persson and later developed and published by the Swedish company Mojang since 2009. The creative and building aspects of Minecraft allow players to...  build constructions out of textured cubes in a 3D procedurally generated world. Other activities in the game include exploration, gathering resources, crafting, and combat. Multiple gameplay modes are available, including survival modes where the player must acquire resources to build the world and maintain health, a creative mode where players have unlimited resources to build and the ability to fly, and an adventure mode where players play custom maps created by other players.The alpha version was publicly released for PC on May 17, 2009, and after gradual updates, the full version was released on November 18, 2011. A version for Android was released a month earlier on October 7, and an iOS version was released on November 17, 2011   more
2 votes
0 comments
Minecraft - Voter Comments
No Comments
Vote & Comment
4

Bubsy 3D is a platform video game developed by Eidetic and published by Accolade and Telstar for the PlayStation video game console. Designed by Michael Berlyn, it was released on October 31, 1996 in North America and in August 1997 in Europe. The B... ubsy series stars an eponymous protagonist. It is one of the first 3D platform games, though with limited movement. The game's complete name is a parody of Forbidden Planet, a 1956 sci-fi film.The game was very poorly received and was regarded as one of the worst games of all time by GameTrailers, IGN, and GamesRadar. Many of the major elements of the game received criticism; it has been criticized for its graphics, its controls, and the obnoxious personality of Bubsy   more
2 votes
1 comment
Bubsy 3D - Voter Comments

Ride to Hell: Retribution is an action-adventure game developed by Eutechnyx and published by Deep Silver. It was released for Microsoft Windows, PlayStation 3 and Xbox 360. As of September 21, 2014, the game is no longer available on the Steam plat... form.The game was highly panned by critics upon release, and is considered to be one of the worst video games ever made   more
1 vote
0 comments
Ride to Hell: Retribution - Voter Comments
No Comments
Vote & Comment
6

Custer's Revenge is a controversial video game made for the Atari 2600 by Mystique, a company that produced a number of adult video game titles for the system. The player character is based on General George Armstrong Custer. The game was first rele... ased on September 23, 1982, and has received significant criticism because of its crude simulation of a rape of an Indian woman.Like many other video game manufacturers of the early 1980s, Mystique soon went out of business. It sold the rights to its games to Playaround, which continued to market Custer's Revenge as Westward Ho for a time. Playaround made minor modifications to the game, which included making the skin of the woman darker and having her extend her arm and gesture to Custer to come over to her. It also made a version of the game called General Retreat   more
1 vote
0 comments
Custer's Revenge - Voter Comments
No Comments
Vote & Comment
7

Shaq Fu is a 2D fighting game released on the Sega Mega Drive/Genesis and Super Nintendo game platforms on October 28, 1994. It was ported to the Amiga, Game Gear and Game Boy platforms in 1995. The game was published by Electronic Arts and develope... d by the now-defunct Delphine Software International. It features former professional basketball player Shaquille O'Neal as a playable character. Though it met with a mixed response from critics, it has since come to be considered one of the worst video games of all time. A sequel, Shaq-Fu: A Legend Reborn, is in development   more
0 votes
0 comments
Shaq Fu - Voter Comments
No Comments
Vote & Comment
9

Hotel Mario is a computer puzzle game developed by Fantasy Factory and published by Philips Interactive Media and Nintendo for the Philips CD-i in 1994. The primary character of the game is Mario, who must find Princess Toadstool by going through se... ven Koopa hotels in the Mushroom Kingdom. Every hotel is divided into multiple stages, and the objective is to close all doors on each stage. Defeating a Koopaling on the hotel's final stage takes the player to the following building.After Nintendo decided not to have Philips create an add-on for the Super Famicom/Super NES, they gave Philips permission to use their characters in games for Philips' CD-i. The games were given little time to be developed and little funding, and Nintendo only gave cursory input.The games resulting from the license were widely criticized, with Hotel Mario being regarded as one of the worst Mario-centered games, due to the animation of the shutting doors, the unresponsive controls and especially known for the cutscenes that used full motion video. The CD-i was considered a commercial failure and the games became valuable due to their rarity   more
0 votes
0 comments
Hotel Mario - Voter Comments
No Comments
Vote & Comment
10

Big Rigs: Over the Road Racing

Big Rigs: Over the Road Racing is a 2003 third-person racing video game developed by Stellar Stone and published by GameMill Publishing for Microsoft Windows PC systems. The game was released as a largely unfinished product and many parts of it do n... ot work properly at all.The packaging of Big Rigs states that the main objective of the game is to race a semi-trailer truck to safety in order to deliver illegal cargo being carried by the vessel, while avoiding the local police force. In actuality, there are no police in the game, no such objectives are presented within the game itself and there is no load attached to the truck. Much of the game instead centers on the player racing their truck against fellow drivers to the finish line; however, in the earlier versions the player's computer-controlled opponent vehicles have no AI and never move from the starting position. In a later version, the computer-controlled opponent will race around the track, but will stop just before crossing the finish line. The timer in the game is merely aesthetic and has no limit on the gameplay   more
0 votes
0 comments
Big Rigs: Over the Road Racing - Voter Comments
No Comments
Vote & Comment
Leave a comment...
(Maximum 900 words)