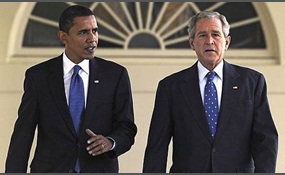 Which one was the worst?

George Walker Bush is an American politician and businessman who served as the 43rd President of the United States from 2001 to 2009, and the 46th Governor of Texas from 1995 to 2000. The eldest son of Barbara and George H. W. Bush, he was born in N... ew Haven, Connecticut. After graduating from Yale University in 1968 and Harvard Business School in 1975, Bush worked in oil businesses. He married Laura Welch in 1977 and ran unsuccessfully for the House of Representatives shortly thereafter. He later co-owned the Texas Rangers baseball team before defeating Ann Richards in the 1994 Texas gubernatorial election. Bush was elected president in 2000 after a close and controversial election, becoming the fourth president to be elected while receiving fewer popular votes nationwide than his opponent. Bush is the second president to have been the son of a former president, the first being John Quincy Adams. He is also the brother of Jeb Bush, former Governor of Florida.Eight months into Bush's first term as president, the September 11, 2001 terrorist attacks occurred   more
22 votes
3 comments
George W. Bush - Voter Comments

Barack Hussein Obama II (/bəˈrɑːk huːˈseɪn oʊˈbɑːmə/; born August 4, 1961) is the 44th and current President of the United States. He is the first African American to hold the office. Obama served as a U.S. Senator representing the state of Illinois...  from January 2005 to November 2008, when he resigned following his victory in the 2008 presidential election.Born in Honolulu, Hawaii, Obama is a graduate of Columbia University and Harvard Law School, where he was the president of the Harvard Law Review. He was a community organizer in Chicago before earning his law degree. He worked as a civil rights attorney in Chicago and taught constitutional law at the University of Chicago Law School from 1992 to 2004. He served three terms representing the 13th District in the Illinois Senate from 1997 to 2004   more
11 votes
2 comments
Barack Obama - Voter Comments