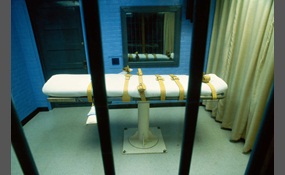 Worst way to be executed?

Flaying, also known colloquially as skinning, is the removal of skin from the body. Generally, an attempt is made to keep the removed portion of skin intact. This article deals with flaying in the sense of torture and execution of humans.
7 votes
1 comment
Flaying - Voter Comments

The blood eagle was a method of execution, that is sometimes mentioned in Nordic saga legends. It was performed by cutting the skin of the victim by the spine, breaking the ribs so they resembled blood-stained wings, and pulling the lungs out throug... h the wounds in the victim's back. Salt was sprinkled in the wounds. Victims of the method of execution, as mentioned in skaldic poetry and the Norse sagas, are believed to have included King Ælla of Northumbria, King Edmund of East Anglia, Halfdan son of King Haraldr Hárfagri of Norway, King Maelgualai of Munster, and possibly Archbishop Ælfheah of Canterbury.The victims had to suffer in silence if they wanted to reach Valhalla. One scream and they were condemned to never feast with the gods.The historicity of the practice is disputed. Some take it as historical evidence of atrocities fueled by pagan hatred of Christianity. Others take it as fiction: heroic Icelandic sagas, skaldic poetry and inaccurate translations.The Stora Hammars stones are believed to date sometime between the 8th and 11th centuries AD, before Christianity was prevalent in Scandinavia   more
4 votes
0 comments
Blood eagle - Voter Comments
No Comments
Vote & Comment
3

Scaphism, also known as the boats, was an ancient Persian method of execution designed to inflict torturous death that was described by the Persians' archenemies, the Greeks. The name comes from the Greek σκάφη, skáphe, meaning "anything scooped out... ".The intended victim was stripped naked and then firmly fastened within the interior space of two narrow rowing boats joined together one on top of the other with the head, hands and feet protruding. The condemned was forced to ingest milk and honey to the point of developing a severe bowel movement and diarrhea, and more honey would be poured on them to attract insects, with special attention devoted to the eyes, ears, mouth, genitals, and anus. In some cases, the executioner would mix milk and honey and pour that mixture all over the victim. They would then be left to float on a stagnant pond or be exposed to the sun. The defenseless individual's feces accumulated within the container, attracting more insects which would eat and breed within the victim's exposed flesh, which—pursuant to interruption of the blood supply by burrowing insects—became increasingly gangrenous   more
3 votes
0 comments
Scaphism - Voter Comments
No Comments
Vote & Comment
4

Burning at the stake

Being tied to a wooden board above a fire.
3 votes
0 comments
Burning at the stake - Voter Comments
No Comments
Vote & Comment
5

Lethal injection is the practice of injecting a person with a fatal dose of drugs for the express purpose of causing immediate death. The main application for this procedure is capital punishment, but the term may also be applied in a broad sense to...  euthanasia and suicide. It kills the person by first putting the person to sleep, and then stopping the breathing and heart, in that order   more
1 vote
0 comments
Lethal injection - Voter Comments
No Comments
Vote & Comment
6

Stoning, or lapidation, is a form of capital punishment whereby a group throws stones at a person until death ensues. No individual among the group can be identified as the one who kills the subject. This is in contrast to the case of a judicial exe... cutioner. Slower than other forms of execution, stoning is a form of execution by torture.Stoning is called Rajm in Islamic literature, and it remains a legal form of judicial punishment in United Arab Emirates, Iran, Iraq, Qatar, Mauritania, Saudi Arabia, Somalia, Sudan, Yemen, Northern Nigeria, Aceh in Indonesia, Brunei, and Pakistan; although several other countries practice extrajudicial stoning, while several others have sentenced people to death by stoning, but have not carried out the sentences.In modern times, allegations of stoning are politically sensitive, as in case of Iran, which describes such allegations as political propaganda   more
1 vote
0 comments
Stoning - Voter Comments
No Comments
Vote & Comment
7

A high school is a school that provides children with part or all of their secondary education. It may come after primary school or middle school and be followed by higher education or vocational training.
1 vote
0 comments
High school - Voter Comments
No Comments
Vote & Comment
8

Slow slicing, also translated as the slow process, the lingering death, and death by a thousand cuts or “千刀万剐”, was a form of torture and execution used in China from roughly AD 900 until it was banned in 1905. In this form of execution, a knife was...  used to methodically remove portions of the body over an extended period of time, eventually leading to death. The term "língchí" is derived from a classical description of ascending a mountain slowly. Lingchi was reserved for crimes viewed as especially severe, such as treason, or killing one's parents. The process involved tying the person to be executed to a wooden frame, usually in a public place. The flesh was then cut from the body in multiple slices in a process that was not specified in detail in Chinese law, and therefore most likely varied. In later times, opium was sometimes administered either as an act of mercy or as a way of preventing fainting. The punishment worked on three levels: as a form of public humiliation, as a slow and lingering death, and as a punishment after death   more
1 vote
0 comments
Lingchi - Voter Comments
No Comments
Vote & Comment
9

Crucifixion is a form of slow and painful execution in which the victim is tied or nailed to a large wooden cross and left to hang until dead. It is principally known from antiquity, but remains in occasional use in some countries.The crucifixion of...  Jesus is a central event in Christianity, and the crucifix is the main religious symbol for many churches   more
1 vote
0 comments
Crucifixion - Voter Comments
No Comments
Vote & Comment
10

In other words, being thrown off a cliff or building by executioners.
0 votes
0 comments
Falling - Voter Comments
No Comments
Vote & Comment
12

Decapitation is the separation of the head from the body. This form of injury invariably results in death, as severing the head deprives all other organs of the involuntary functions that are essential for the body to function while the brain itself...  is deprived of oxygenated blood.Beheading typically refers to the act of intentional decapitation, either as a means of murder or execution; it may be accomplished, for example, with an axe, sword, knife, wire, or by other more sophisticated means such as a guillotine. An executioner carrying out decapitations is called a headsman. Accidental decapitation can be the result of an explosion, car or industrial accident, improperly administered execution by hanging or other violent injury. Suicide by decapitation is rare, but not unknown. The national laws of Saudi Arabia, Yemen, Iran, and Qatar permit beheading, but Saudi Arabia is the only country that continues to behead its offenders.The word decapitation can also refer, on occasion, to the removal of the head from a body that is already dead   more
0 votes
0 comments
Decapitation - Voter Comments
No Comments
Vote & Comment
13

Hanging is the suspension of a person by a noose or ligature around the neck. The Oxford English Dictionary states that hanging in this sense is "specifically to put to death by suspension by the neck", though it formerly also referred to crucifixio... n and death by impalement in which the body would remain "hanging". Hanging has been a common method of capital punishment since medieval times, and is the official execution method in many countries and regions. In this specialised meaning of the common word hang, the past and past participle are usually taken to be hanged instead of hung.Hanging oneself is a method of suicide in which a person applies a ligature to the neck and brings about unconsciousness and then death by suspension. Partial suspension or partial weight-bearing on the ligature is sometimes used, particularly in prisons, mental hospitals or other institutions, where full suspension support is difficult to devise, because high ligature points have been removed   more
0 votes
0 comments
Hanging - Voter Comments
No Comments
Vote & Comment
14

Execution by firing squad, sometimes called fusillading, is a method of capital punishment, particularly common in the military and in times of war. Execution by shooting is a fairly old practice. Some reasons for its use are that firearms are usual... ly readily available and a gunshot to a vital organ usually kills relatively quickly. Before the introduction of firearms, bows or crossbows were often used — Saint Sebastian is usually depicted as executed by a squad of Roman auxiliary archers in around 288 AD; King Edmund the Martyr of East Anglia, by some accounts, was tied to a tree and executed by Viking archers on 20 November 869 or 870 AD.A firing squad is normally composed of several military personnel or law enforcement officers. Usually, all members of the group are instructed to fire simultaneously, thus preventing both disruption of the process by a single member and identification of the member who fired the lethal shot. To avoid the disfigurement of multiple shots to the head, the shooters are typically instructed to aim at the heart, sometimes aided by a paper target   more
0 votes
0 comments
Execution by firing squad - Voter Comments
No Comments
Vote & Comment
15

A gas chamber is an apparatus for killing humans or animals with gas, consisting of a sealed chamber into which a poisonous or asphyxiant gas is introduced. The most commonly used poisonous agent is hydrogen cyanide; carbon dioxide and carbon monoxi... de have also been used. Gas chambers were used as a method of execution for condemned prisoners in the United States beginning in the 1920s and continues to be a legal execution method in three states. During the Holocaust, large-scale gas chambers designed for mass killing were used by Nazi Germany as part of their genocide program, and also by the Independent State of Croatia at the Jasenovac concentration camp. The use of gas chambers in North Korea has also been reported   more
0 votes
0 comments
Gas chamber - Voter Comments
No Comments
Vote & Comment
Leave a comment...
(Maximum 900 words)