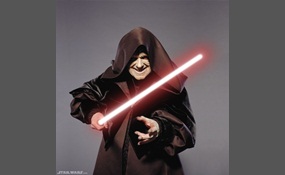 Would Darth Sidious/Emperor Palpatine defeat Sephiroth in a duel?

Conditions: Takes place in the deserts of Tatooine, Sephiroth has a sword immune to lightsaber damage, and neither can come back to life after being killed or use anything other than their sword and raw powers. 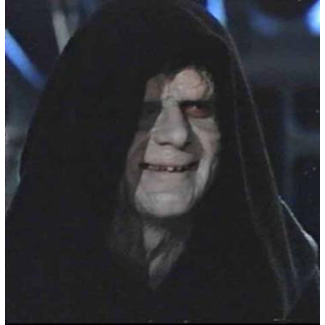 Sheev Palpatine is a fictional character and the main antagonist of the Star Wars franchise, specifically serving as the primary antagonist of Episodes III and VI. He is portrayed in the live action films by Ian McDiarmid.In the original trilogy, the character is depicted as the aged, pale-faced Emperor of the Galactic Empire. In the prequel trilogy, he is portrayed as a charismatic Senator from Naboo, who—through the use of deception and political manipulation—rises to the position of Supreme Chancellor of the Galactic Republic and, finally, to Emperor of the first Galactic Empire.Though outwardly appearing to be a well-intentioned public servant and supporter of democracy prior to becoming Emperor, he is in fact Darth Sidious, the Dark Lord of the Sith—a cult of practitioners of the dark side of the Force previously thought to have been extinct in the galaxy for a millennium. As Sidious, he instigates the Clone Wars, all but destroys the Jedi, and transforms the Republic into the tyrannical Galactic Empire. He also corrupts Jedi Knight Anakin Skywalker, who serves at his side as the Sith lord Darth Vader. 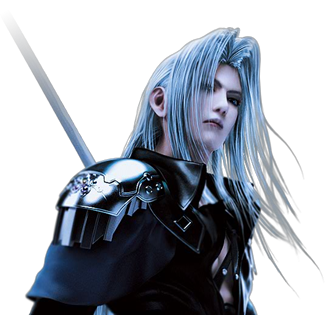 Sephiroth is a fictional character in the role-playing video game Final Fantasy VII developed by Square, where he is the main antagonist. Character designer Tetsuya Nomura conceived and designed Sephiroth as an antagonist to and direct physical opposite of the game's main character, Cloud Strife. The character was portrayed in Japanese by voice actor Toshiyuki Morikawa and in English by both Lance Bass in Kingdom Hearts and George Newbern in all his subsequent appearances.Sephiroth is revealed in Final Fantasy VII to be the result of an experiment by the megacorporation Shinra, in which they injected him with cells from the extraterrestrial lifeform Jenova when he was still a fetus. Upon discovering this, Sephiroth decides to follow what he believes to be his destiny and take control of the Planet, whilst Cloud and the game's other protagonists attempt to stop him. Sephiroth's role in the story, as well as his background, are expanded in the Compilation of Final Fantasy VII. Additionally, he appears as a boss character in the Kingdom Hearts series, and other video games developed by Square.

TRUEandHONESTuser says2015-07-07T18:20:52.1142794-05:00
Report Post
After, but neither opponent knows what the other is capable of doing (Example: Sephiroth could underestimate Palpatine, seeing him as mearly an old man).

FreedomBeforeEquality says2015-07-08T09:23:51.2554399-05:00
Report Post
He is inherently immune to all things the dark side entails though, as his status immunities suggest. I dont know what chance Sidious has.

gabep says2015-07-13T01:15:41.6773908-05:00
Report Post
@FreedomBeforeEquality - Sidious is very skilled with lightsabers and other bladed weapons. He mastered all seven forms of lightsaber combat and could use them ambidextrously. In the Clone Wars animated series, Sidious defeated both Maul, his former apprentice, and Savage Opress. Both were skilled in the use of the dark side and in lightsaber combat, but Sidious was smiling and cackling during the battle, drawing it out and toying with his opponents. In Revenge of the Sith, he easily defeats three high-level Jedi Masters and only allows himself to be cornered as a means of turning Anakin to the dark side. He is also a very dangerous force user. His force lightning, at full intensity, could vaporize opponents. His abilities with force concealment were so great that he could hide himself from the entire Jedi Order. As a master of Dun Moch, he could also confuse and demoralize his opponent before the battle even started. In a way, he successfully used this technique against the Jedi Order. There is no reason to believe that any being can resist that kind of power. Since he is a master of essence transfer, it is nearly impossible to permanently kill him. As powerful as Sephiroth is, he is outclassed by Sidious. I think most Jedi Council members can defeat him. Also, where did you get those HP stats? Seems purely subjective to me. Darth Sidious, and most other force users, augments his resiliency and stamina through the force. He can easily outlast Sephiroth.

FreedomBeforeEquality says2015-07-13T12:26:45.4839257-05:00
Report Post
Just going again based on the natural status immunities of his final forms ... Sephiroth is immune to all of those things. Maybe not lightning elemental, but darkness, confusion, and all those. HP stats for sephiroth are from the FF7 wiki and Sidious only showed up in one game as an actual character that I could find, Star Wars Galactic Defense, and in that he is a semi high ranking character ... But most certainly not the most powerful one you can get stat wise.

FreedomBeforeEquality says2015-07-15T08:32:05.9490768-05:00
Report Post
Subjective by authorities on the matter. The characters are fictional, writers of said characters should be able to establish an authoritative hierarchy amongst them. Sidious is not perceived in his star wars universe to be the ultimate enemy, Sephiroth is the ultimate enemy in his universe. That can only be said because the FF universe seems to disregard past editions with each new one, the star wars universe carries on into each new episode.

gabep says2015-07-15T09:28:56.1536329-05:00
Report Post
He is THE main villain in the movies and several (now non-canon, but fvck Disney) EU stories because he repeatedly transfers his essence to clone bodies after his death.
Privacy Policy | Terms of Use
Sitemap | View Desktop Version
©2020 Debate.org. All rights reserved.