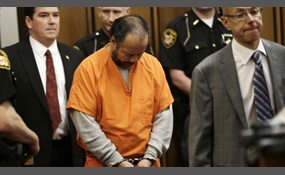 Would the death penalty have been appropriate for Ariel Castro?

Ariel Castro kidnapped 3 women in Cleveland Ohio and held them captive for a decade. During their time in captivity he raped and beat them and kept them chained up in the basement and later upstairs rooms. He also killed 5 of his own kids by punching Michelle (his first and most hated captive) in the belly when he got her pregnant. He was good friends with Gina's family and often participated in vigils that were held for her on the anniversarys of her kidnapping and help her family look for her. He

pierreHC says2014-05-22T12:27:09.5426320-05:00
Report Post
There is absolutely no point in keeping his likes alive. Incarceration for life is every bit as "cruel and unusual" as execution and, were it not for the absolutely ridiculous "safeguards" and endless appeals we have build into the capital punishment system, would be much more expensive than simply ending their lives. For heinous crimes, swift and certain execution is appropriate and necessary. What is totally inappropriate is execution after years or even decades of incarceration while endless appeals, stays of execution, etc. are carried on. I say, try them fairly and swiftly, give them one real and carefully considered appeal and then, if they're still adjudged guilty, execute them within a day or two.
Vote & Comment
2