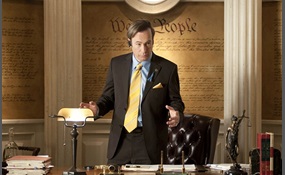 Would you be your own lawyer?

If you were charged with a crime, had no money, thrown in jail, but were given all that was necessary to win a non guilty verdict, would you represent yourself in court?

No, too risky! The justice system always wins.

Of course I would fight for my rights!

4 votes
2 comments
Of course I would fight for my rights! - Voter Comments

Mister_Man says2015-09-08T17:46:15.7013343Z
Report Post
If I was not guilty, I would fight my own battle. I don't know everything about the legal system and loopholes and all that, but I know enough to conduct myself in a way that will most likely get me the right sentence.

1 vote
0 comments
Yes, only if I was 100% sure I had everything. - Voter Comments
No Comments
Vote & Comment
4
VOTING CLOSED