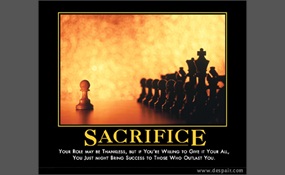 Would you sacrifice your life for someone you cared about or even others in general?

You are pitted between life and death, what would you choose? The examples included are just there, use whatever scenario you want to.

Sacrifice yourself for someone you care about

The men in uniform approached us with their wolfish grins. "You two! We are looking for someone say 'yea-high', pretty face, and happens to be a traitor. A little bird tells me that they've been seen waltzing around this area and I just thought, 'he... ll, why not check with these two suspiciously familiar individuals?'. So, you seen anyone of interest around here? Harboring a fugitive perhaps? Come on, speak up little doggies." "No," I said as I stared into the man's eyes. He leaned forward and I could smell his vile breath. "Tell you what, profligate, I'm feeling generous today. You choose: yourself or your pretty little boyfriend. It matters not, the Emperor says there's only one of you. That means body count needs only to be one. So, choose no one and I'll kill you both. Choose yourself and you will leave him with no one. Choose him and you will be left with no one." "I'm not afraid of you, pig," I responded and the man smiled. "Fantastic," he quickly pulled out his gun and fired several shots into my chest. "Leave him.   more
8 votes
2 comments
Sacrifice yourself for someone you care about - Voter Comments

Your life is worth saving. You'll get your revenge one day, but for now you live on.
4 votes
4 comments
Life for yourself - Voter Comments

Sacrifice yourself for others

It started off simply: "Ladies, Gentlemen, Invertebrates. This is going to be quick and easy so I hope you all brought a condom. You there, hey beautiful. Why don't you open up that safe and we'll be on our merry way, yeah? Nobody do anything stupid...  because I just got this coat." Then ended tragically: "Apparently one of you sods decided to call the police. While I hate to make this dramatic, we're going to have to kill one of you to show them that we mean business. So, while I would love to play Russian Roulette with you all I'm going to let one of you be the hero. So, any volunteers?" "Me," I said with the hopes of grabbing his gun and going out like a hero   more
3 votes
1 comment
Sacrifice yourself for others - Voter Comments