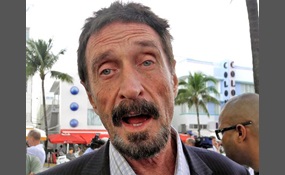 Would you vote John McAfee for president in 2016?

He may be running. It hasn't really been confirmed nor denied. He said there will be an announcement at 6PM Eastern tomorrow regarding the rumors.

No, I would not vote for John McAfee.

2 votes
1 comment
No, I would not vote for John McAfee. - Voter Comments

I do not know enough about John McAfee yet to decide.

1 vote
0 comments
I do not know enough about John McAfee yet to decide. - Voter Comments
No Comments
Vote & Comment
3

Yes, I would vote for John McAfee.